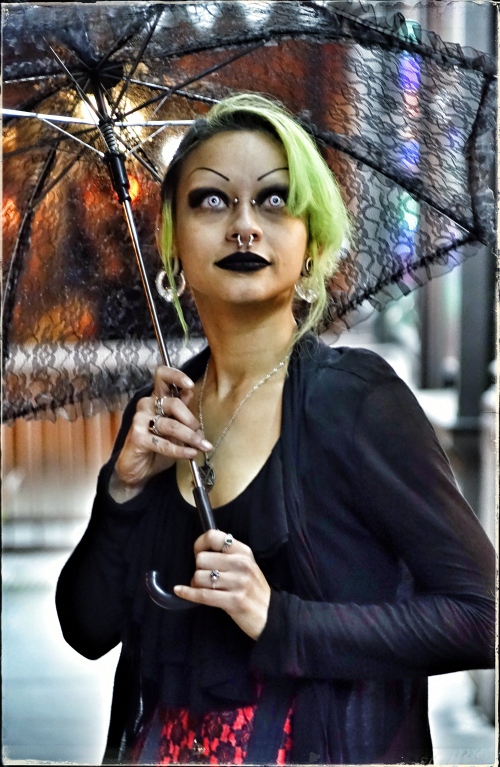 Portrait of Paradox shot with RX10 at 180mm 2.8 jpg and processed in Snapseed

My first foray into video started off as a parody of sorts, but then it got serious as I delved deeper into the project and realized I could offer a commentary on what fringe persona have to deal with on a daily basis. I invite you to watch 10 Hours Walking in NYC as a Goth before reading the rest of this blog post, you’ll laugh and the whole thing will make more sense!

In early November a video was released on Youtube called, “10 Hours Walking in NYC as a Woman” which secretly video documented a simply dressed woman as she silently made her way about NYC and received catcalls left and right. The elements of the 10 Hours video are particular. The subject does not speak; they are “silent walking” and no matter how much they are intimidated they don’t respond. Subtitles are given for the catcalls they receive, and these subtitle float along at the bottom of the screen as the subject walks. A person also joins them and walks beside them for a prolonged period, and the subtitle keeps a tab on that time. The 10 Hours Walking as a Woman is actually quite a good piece of film making due to its stylistic choices. Proof of it being so good is the viral exposure it has garnered, over 36 million views! 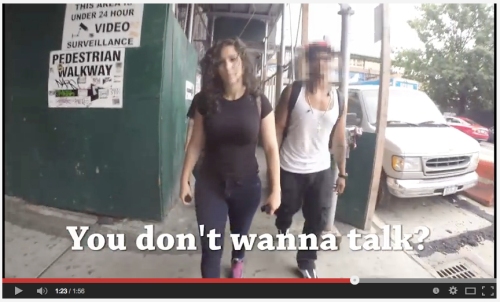 Ten Hours Walking as a Woman was created Rob Bliss, who runs his own viral video marketing agency. Bliss partnered with Hollaback, an advocacy group dedicated to ending street harassment. If you are interested in more of the original story behind the video the Washington Post has a great article about it here.

What got me were the parody videos that appeared after the original. Three in particular inspired me to make my own, the first was 10 Hours Walking in NYC as Jew, which is super hilarious. If you don’t get the joke, let me explain- Jews normally aren’t missionary, but a particular sect, the Lubavitch, or Chabab Jews get extra points for bringing a way ward Jew back into the fold. So in NYC, if you look even remotely Jewish, they accost you and try to get you to pray. It’s pretty indimic and I have been accosted by these particular jews many times over the years. Blame it on my big nose I guess. The other funny ones are; 10 Hours Walking in NYC as Princess Leia, as a white male, as a jets fan…  it goes on. They got to me and I figured it would be great subject matter to make a short video with. I had to try! (Note: the Princess Leia one is extremely funny in a nerdy way) 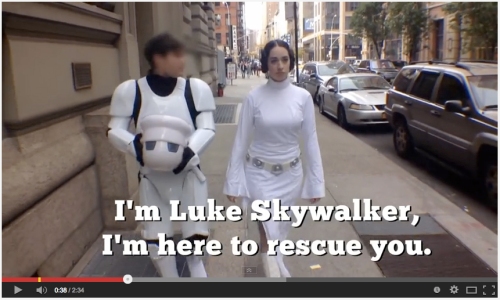 For the gear, I was currently testing a Sony RX10 for a B&H project and this camera, aside from an awesome still camera, shoots incredible video as well. Now I’m so not a video guy but I like a good challenge so I figured this was the opportunity to test the camera. I slapped on a Rode Video Mic ‘cause the built in mic is lame. The stabilizer in the Sony RX10 is superb, so no need for steady cam was called for, and also, I wanted a little bump and jump to give it that renegade look. I had my lifelong friend and Suspect assistant Joe Asaro guide me as I walked backwards in front of Paradox. The excellent Rode mic picked up her footsteps perfect, and since it was facing forward, didn’t pick up my steps (which I was worried about, walking backwards gives you a heavy step). 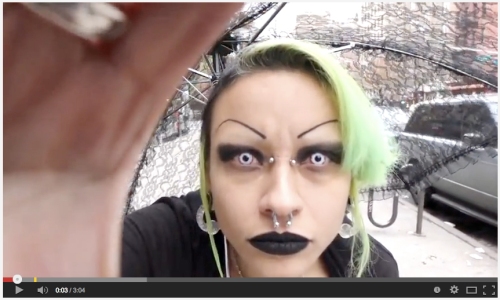 The opening scene starts with the walker adjusting the lens. I love Paradox’s “Marilyn Manson” eyes in this scene.

While the original was spontaneous I knew Paradox would get little attention in the East Village where I wanted to film. So I went on line to the facebook group, “Goth after 30” and polled the elder Goths catcalls they have heard over the years. I edited together these comments and built a script. To parody the guy who walks beside the woman in the original 10 Hours vid (Shoshanna Roberts) I wanted something sort of outrageous so I bought a Priest shirt at the Halloween Adventure Store for $15 bux and caste the perfect “Priest”, NYC underground actor Joe Freedom. The idea for the “Jesus Saves” comment was made up on the spot, but I feel it worked out perfect. Notice the (13 minutes) line, the whole video has small subtexts that fit goth humor perfectly. Event the last title states, “666 comments were made”, that’s goth humor at its best. 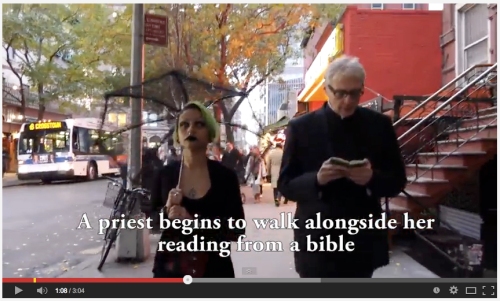 One of the stars for sure is my Mother-in-law Elvira. She is a sweet little lady from Milan and needed a bit of coaxing to be the freak with the crucifix. I figured with her diminutive size and black clad look she could pull off the scene comically and with aplomb. In the editing phase I had to make her appearance with a fast cut because she looked to Barbara, her daughter and my wife right after “accosting” Paradox. I think the fast cut is hilarious and gets the point across perfectly. Almost all of the scenes were done in one take. 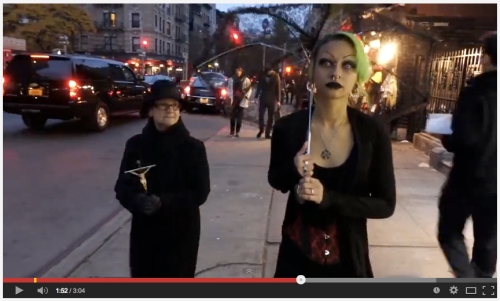 Speaking of comedy I wanted to interject something very goth culture like, and the dominant factor that brings all gothdom together is music and dance. Paradox had asked if she could bring a some friends along, and I immediately conceived of the scene outside of the Gothic Renaissance (notice the gargoyle?) store. It would be a fast dance scene complete with old skool boom box. Joe A. schlepped in his boom box and I recruited the one and only William of New Goth City fame to be the boom box operator during the scene. The music is a youtube approved goth sound track that really worked. I only wanted them to dance for a few seconds but what got me was Paradox’s perfect sashay. She sums it up in haste, and as fast as it begins, an unscripted pedestrian walks through the scene, then it’s over and Paradox continues her silent walk. 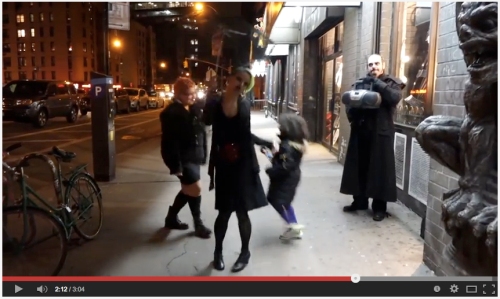 The video took about 3 hours to shoot. It was cold, I was layered up, and Paradox was a super trooper for enduring the scenes only wearing a skirt, corset and light top. William stood vigilant over the gear as we shot, and I trusted Joe to guide me as I walked backwards and faced Paradox as she strolled along, umbrella in hand and getting harassed left and right. Albeit a scripted harassment, half of the harassers were recruited right on the street, the other half I arranged to meet up at points along 2nd Avenue. We ticked off the best comments and gave the lines out the strangers that we recruited. The shoot went off perfect. It was tons of fun and Paradox really rocked it. All that was left was to edit the footage and that was the part I feared most. 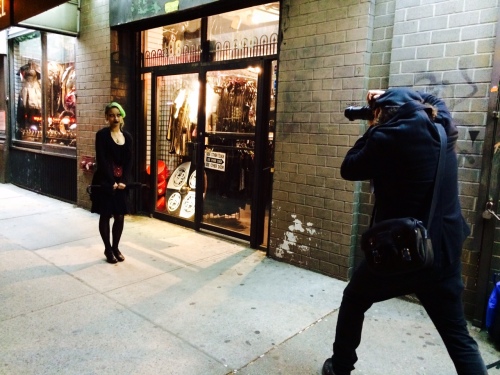 I started off working with Apple’s iMovie but it turned out that soft ware was not up to the task. You couldn’t add the text in the live video, and I needed that to pay proper homage to the original with the subtitling of the catcalls. I downloaded the trial of Adobe Premier and rolled up my sleeves and had at it. I haven’t learnt new software in ages but with in 5 hours, had it cut and ready to go. After spending 5 hours looking pretty much at Paradox’s face and those eyes (double contacts if you were wondering) to say I didn’t have a bit of a goth crush would be a lie. Premier was easier to figure out than I feared and dare I say, I kinda like editing now. I look forward to my next project to edit. 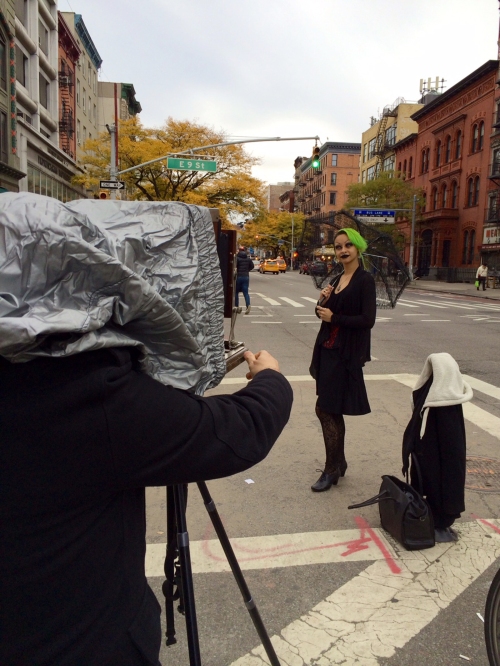 Before we began, I busted out my Deardorff 8×10 with Kodak 14″ lens and made two exposures with Berrger BPF200. Yup, I’m the kind of guy who shows up to shoot film stills with a wooden 8×10 camera. Truth is, the Paul Strand retrospective at the Philly Museum of Art I had just seen inspired me and with a great model at your disposal such as Paradox, you gotta make the most of the collaboration. I hope to print these in cyanotype soon.

One thing that surprisingly manifested itself as this project unfolded, while the whole film was scripted and started as a parody, it rang true. Paradox and her ilk do indeed endure catcalls. So while it is funny, and was inspired by a straight up girl doing the silent walk, there is a substantial statement about society and those who walk the margins have to endure. This video does make a statement, and while catcalling any woman is un-gentleman like, the same applies to woman, boys or anyone who expresses themselves in a flashy, punk, drag, or gothic manner. Regarding the original, it has also caused some controversy. The video states that she was catcalled by all ethnic backgrounds, however the video seems to show only latinos and blacks. Where are the white men? I’m not going to comment further, but would like the viewers question this aspect and draw their own conclusions. Also, Shoshana B. Roberts is now receiving rape threats as a response to the original video. Humanity can be disappointing in all its forms.

Please help the cause and share the video! Thank you,