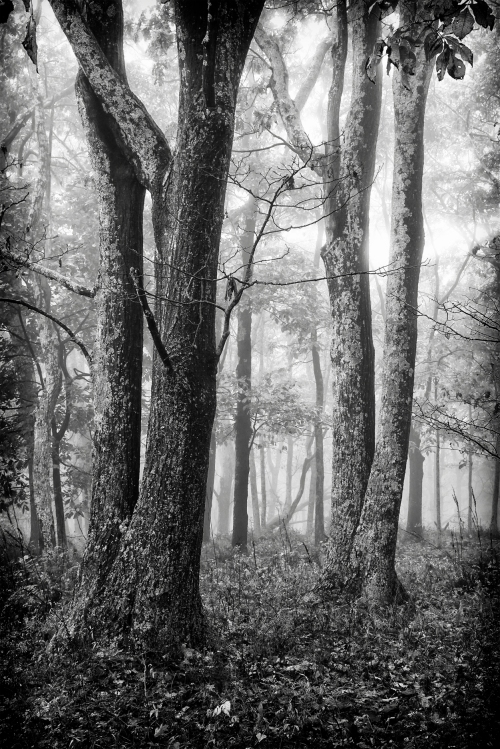 The mist is my new favorite weather to shoot in.

“There is unrest in the forest

There is trouble with the trees

For the maples want more sunlight

And the oaks ignore their pleas”

I’m so thrilled, in the pursuit of creating images using the RX10 for an upcoming presentation on the camera I stumbled upon a new series that is taking shape, The Trees. 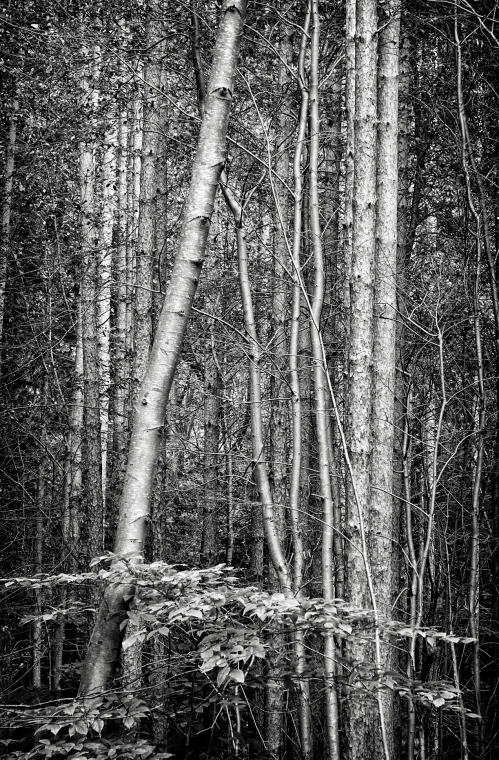 I like to use the long fast lens on the camera to find a pattern and texture of the trees. I am shooting jpegs, and then putting them into Nik Silver EFX2 for a black and white treatment. 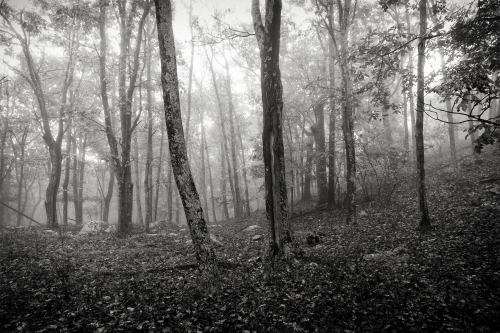 The Mist in the forest at Shenandoah National Park. 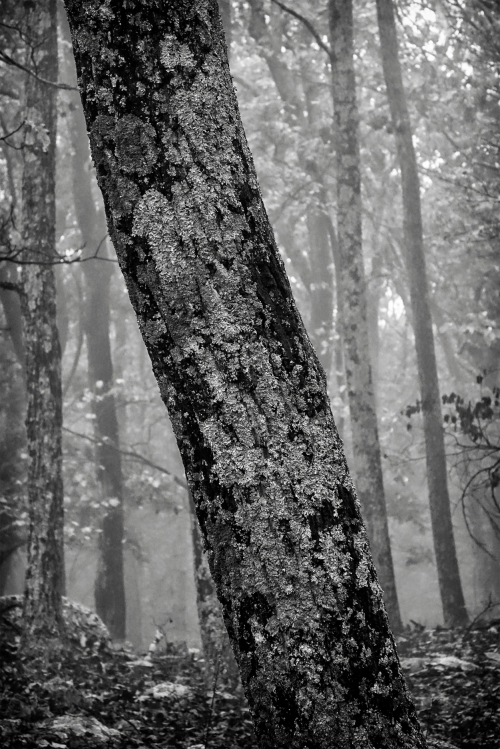 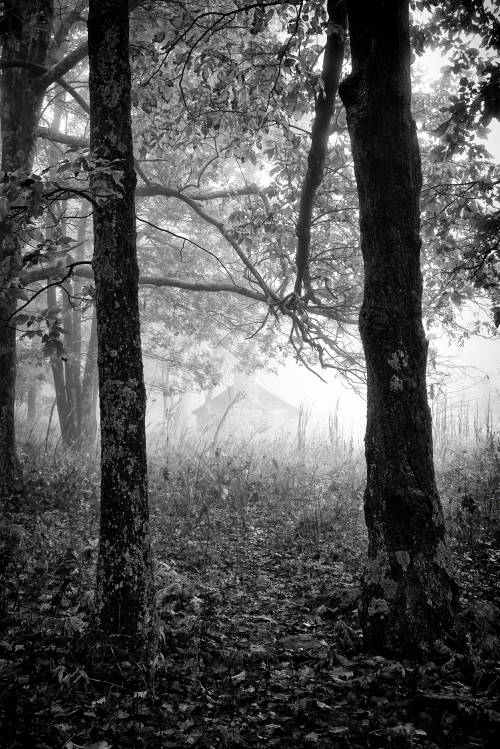 I’ll be honest, I don’t really care for Nature photography. But this series is resonating to me, I mean I do really like trees. They are old and wise in general, they have a mystical quality. Being pagan it’s like photographing gods in many ways. 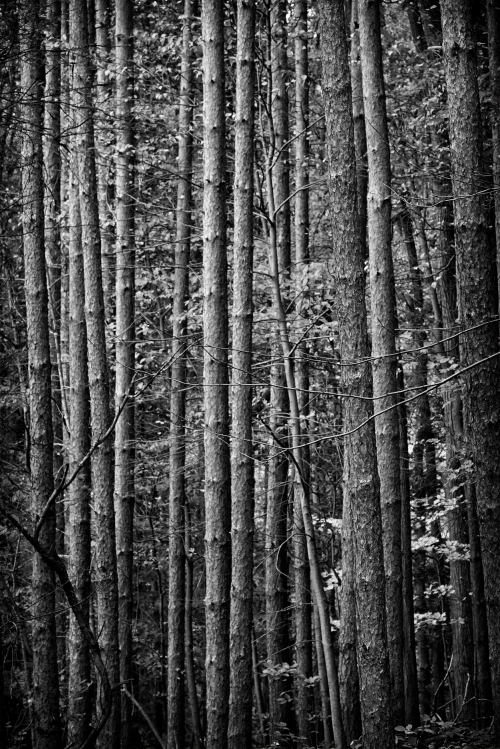 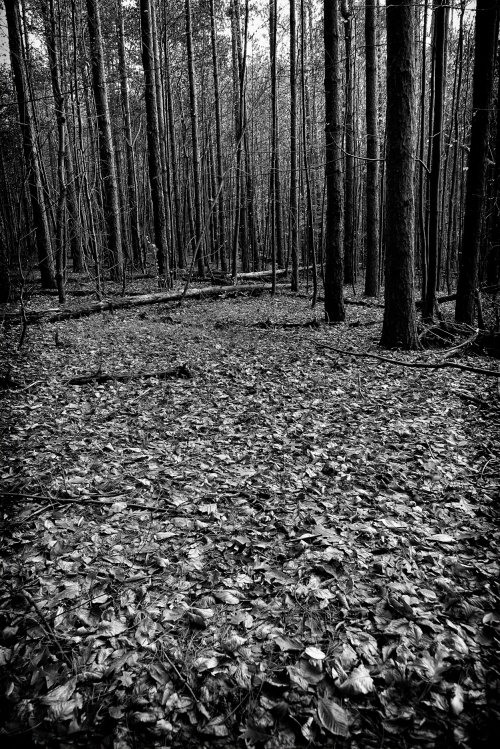 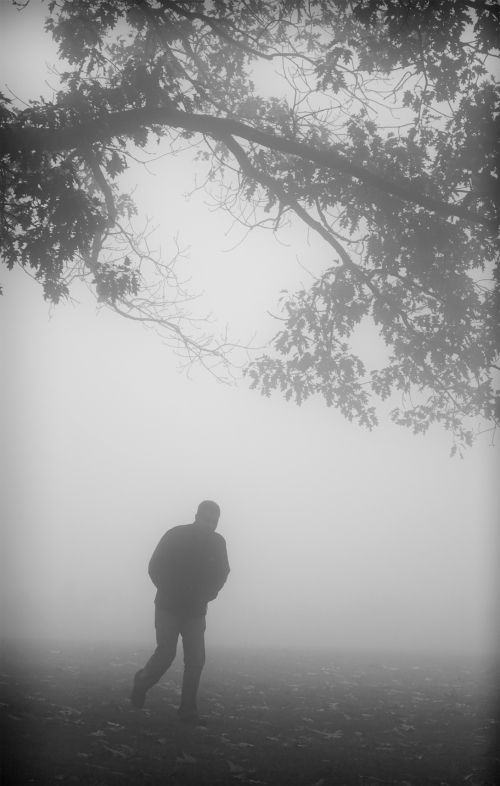 The fog was thicker than pea soup at the Dickey Ridge Lodge.

I’m one of those odd people who throw on a heavy backpack and hike in the woods for days. I have been doing it for a long time now, at least 25 years. I have a dwindling network of friends who I go on these hiking trips and we fancy to call our selves Trailpounders. Among all the miles I have hiked in pristine wilderness across many states I am reluctant to carry a cameras, or serious one at least. The reason being weight, and getting the picture right. Cameras can weigh quite a bit, and add to that good lenses so that you can make high quality photographs is daunting when you’re crossing mountains and pushing every fiber of your body to keep moving up switchbacks.

I have been tasked by B&H & Sony to create a program on the RX10. The focus of the program will be, “Travel Composition with the RX10”. To prepare for the program I have been shooting exclusively with the RX10 and pushing what it can do while learning what it cannot do. I’m familiar with the camera, and those who follow my blog will recall the initial review of the RX10 I wrote and shot a little under a year ago. 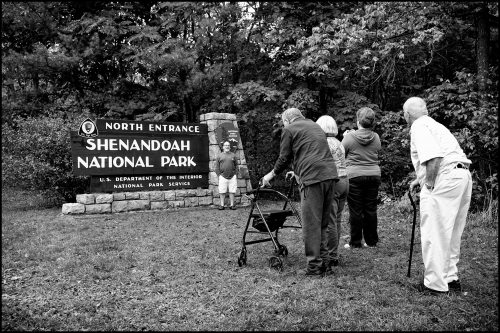 Elderly folk appreciating the park. They moved slow, but stuck a cord inside me. America’s National Parks are for everyone, every age.

This past weekend the Trail Pounders planned a four day hike in the beautiful Shenandoah National Park. Since I was working on material for the presentation, I figured this would be the perfect place to shoot with the RX10 and put it to test doing some nature photography. I would suck up the weight (1.79 lb / 813 g with battery and memory card) and stuff the camera in my trusty Moutainsmith Frost Fire pack.

The trip was excellent and pretty heavy duty. I’m not getting any younger and that pack isn’t getting any lighter. I felt I could have reached for the camera more often, but hiking (especially in a group) is an act all of its own. We managed to traverse about 17 miles in three days which didn’t afford me much lens time. On the trail we crossed a pine covered mountain top (Neighbor Mountain) and ran the ridge. I came across these interesting pine cones that had survived a fire, called a pack break and took some photos. I did my “composition dance” and moved around trying to find that perfect angle to capture the pine cones, you know that angle, the one with a perfect background and every branch facing the right direction? Well I couldn’t find it. I just couldn’t get the lens, the pine cone, and what I wanted to capture groove. 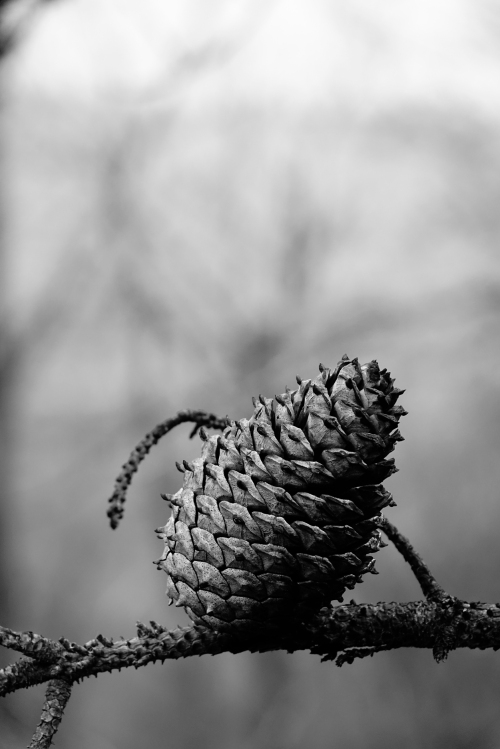 Pine Cone as it was shot- no editing.

As I sat editing I thought, “I was so close… but darn those extra branches”… I saw them when I shot and figured they would not cut my mustard. It was then that I figured I’d work them in post and try to rescue them. This wouldn’t be retouching per sey , but more compositional rescue. I busted out my trusty Wacom table and set to it. After the image was cleaned up I ran it through Silver FX and finished it to my personal standards. 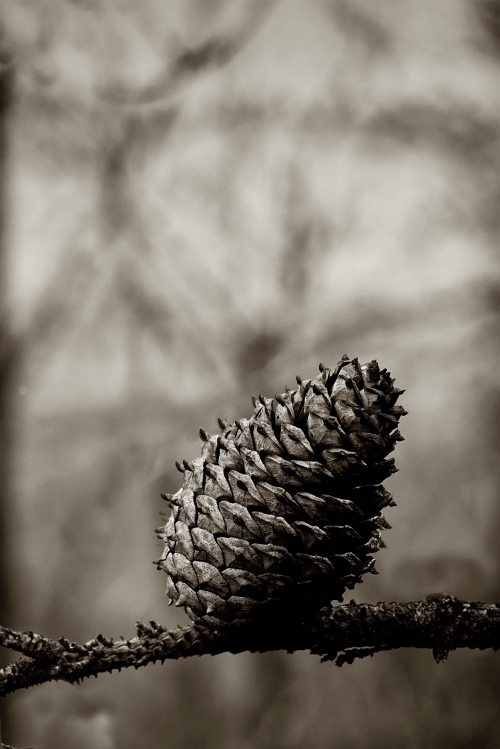 Did I succeed? Did I just polish a turd? I always joke that I have taken so many bad photographs that when I do shoot now, it’s with a great intensity to only shoot what is decent if not compositionally perfect. But now, when the world is simply not cooperating it might be safe to shoot the best you can, and then do some very heavy post to get it right. Ethically I’m not 100 percent behind this, but I do feel good that at least the option is open. What do you think?

Here are a few more from the first edit. I shot in jpeg and used the creative modes that are built into the RX10 such as “Autumn Leaves” and “B&W”. Each image is taken into Photoshop and massaged. 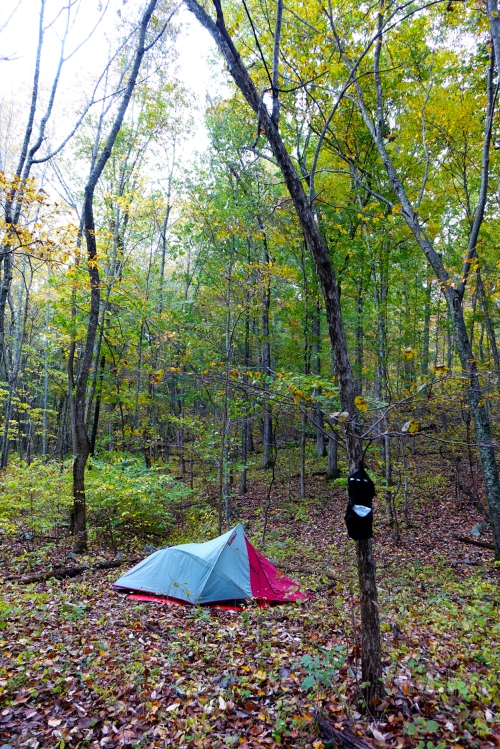 Home and Shelter. I have had this tent since 1993. 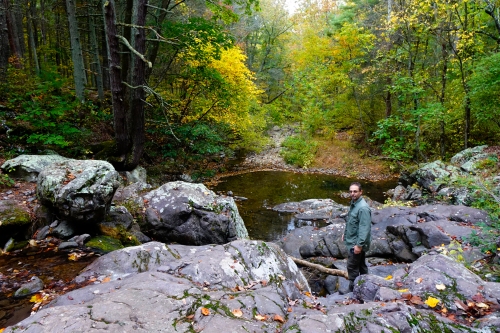 Hiker JA- one of the Trail Pounders founders. Note, a circular polarizer was used to clear up the water behind Joe.

SHAZAM! Joey V, he was a Trail Pounder for years and didn’t even know it. 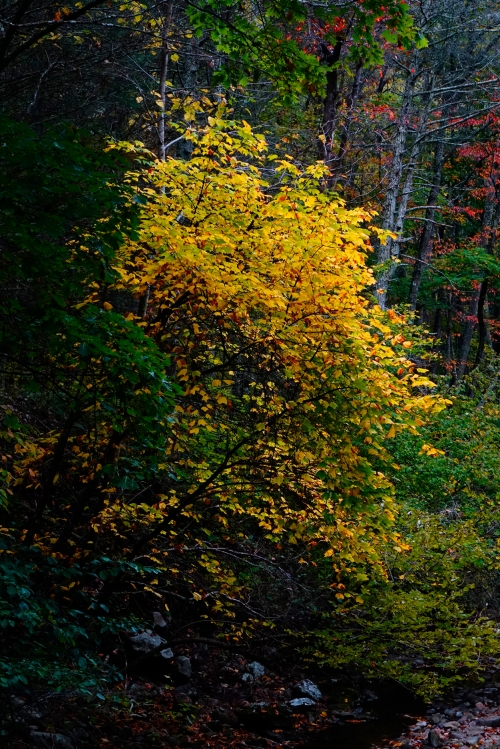 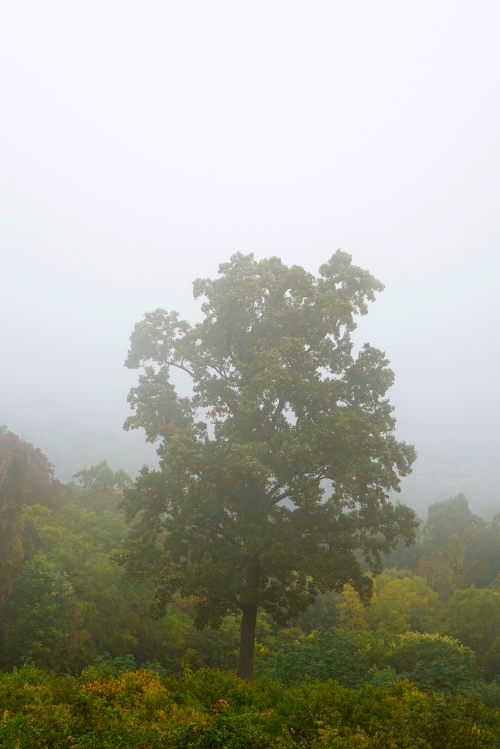 The lone tree sits in the fog.

I’ll post a link to the RX10 Presentation when it goes live. If you don’t live near NYC, we will be recording the presentation and I’ll post that too.

Till then, this Trail Pounder is signing off! 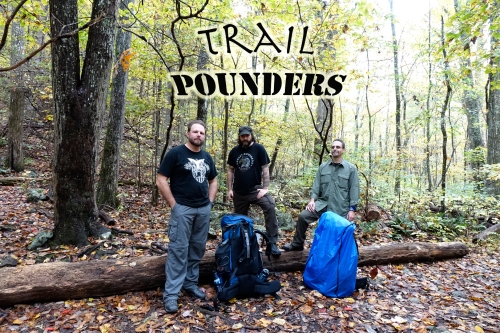 The Last Day of CBGB

This ain’t no fooling around

I ain’t got time for that now…

CBGB was the iconic NYC club that defined the punk era in America. The letters CBGB were an acronym for country, bluegrass, and blues, which was the brainchild of Hilly Kristal who opened the club in 1973 at 315 Bowery. CBGB soon became a famed venue of punk rock and new wave bands like the Ramones, Television, Patti Smith Group, Blondie, Joan Jett & the Blackhearts, and Talking Heads. From the early 1980s onward, CBGB was known for hardcore punk.

Seeing bands play at CBGB’s would always be a blast, and just having a drink at the venerable club was always exciting. The place had tons of character, and I’m not even going to go into what peeing in the bathroom was like. As a matter of fact, when the Metropolitan Museum of Art did the show, Punk: Chaos to Couture they featured a installation piece of the bathroom! CBGB was storied, and an important landmark in NYC. However NYC is an expensive place, and Hilly got his club in trouble. In 2000, CBGB entered a protracted dispute over allegedly unpaid rent and a deal to renew CBGB’s lease, expiring in 2006, failed. The club closed upon its final concert, played by Patti Smith, on October 15, 2006. The end of an era.

“There’s new kids with new ideas all over the world,” Patti Smith declared outside the club at the last show, “They’ll make their own places — it doesn’t matter whether it’s here or wherever it is. but It’s a symptom of the empty new prosperity of our city”.

Upon learning on the eminent end to CBGB I set out to photograph it as part of my loose project entitled, “NY Out of Business”. On a cold and windy late October day I set up my Deardorff 8×10 camera and wide angle 8 ¼ dagor lens in front of CBGB’s. Cars and vans were always parked out side, so I set up as close to the curb as possible and made my exposure. Fearing the high wind would have rocked the camera and caused a blurry image due to a low shutter speed I returned the next day only to find the premiss white washed and the awning skeleton removed. The last vestige of CBGB and her punk heritage was obliterated. Luckily, I shot it just in time.

This was made by scanning the 8×10 negative and correcting for perspective with photoshop using the transform tool.

A year later, the awesome clothing designer John Varvatos leased the property and with deep respect to the orignal punk ethic, integrated as much of the enterior to his shop. Walking in the Bowery Varvatos store is almost like entering a punk museum. He saved the landmark from becoming a 7-11 or worse. Thanks John! 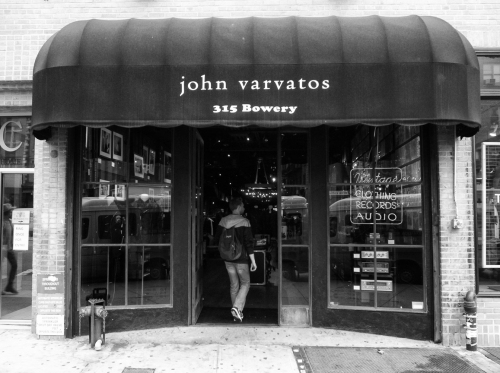 This is the original shot from the Deardorff. I was too close to correct the perspective, so after scanning the negative I was able to correct for perspective in photoshop. 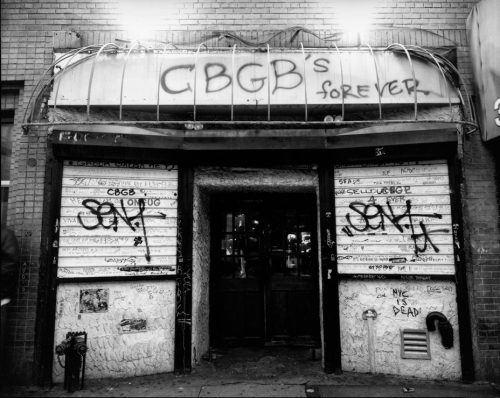 CBGB I miss you, one more piece of NYC that has gone to history.