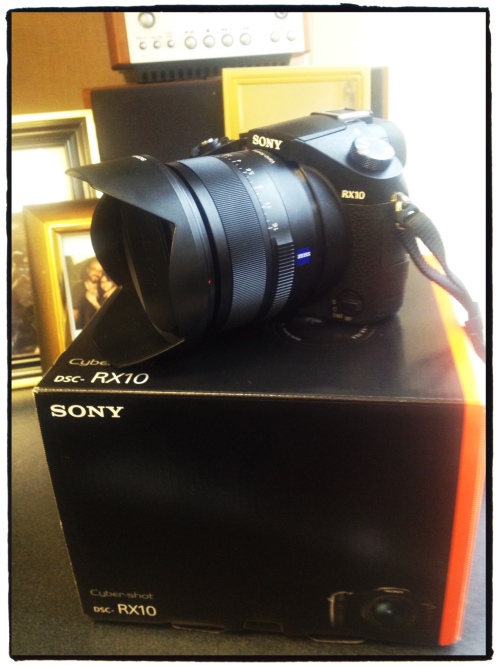 The great digital camera buyer Ben at B&H gave me a call about a month ago and said come down to my office, Sony has something to show us. I was busy and told him I didn’t have time and he replied, “you should come down, they have a game changer here… a 24-200 mm 2.8 constant aperture camera that is compact”. I ran down. Now how can you get that fast aperture of a zoom lens to go from super wide to tele in a compact ZLR (Zoom lens reflex)? What I beheld was the Sony RX10 which actually can do all that. I got to mess around with the prototype and was impressed. Last week I actually got a production model to play with. The following are my observations and some quick work produced while testing it. Like my other reviews I’m not going to get super technical, but I will show you a load of images so you can judge for yourself.

So first off lets get back to that lens, because that’s really the reason to consider this camera. The RX10 sports a Carl Zeiss 24-200 mm f2.8 lens. That focal length is the 35mm equivalent. It is not a 2.8-5.6 variable aperture; it is a fast f2.8 throughout the range. Sweet. Very Sweet. The lens is damn sharp, and in my testing I couldn’t help but put the zoom out and bring in distant subjects. For those of you who know me, I’m a wide guy, and prefer getting more in my picture from using a wider perspective. My testing would have to get me out of my comfort zone, so I decided to shoot something that’s out of range of my wide lenses, NYC water towers. They make great subjects!

This short study was all shot with the creative B&W mode. The RX10 allows you to fine tune the creative mode and I chose a +1 contrast and +1 sharpening for good measure. 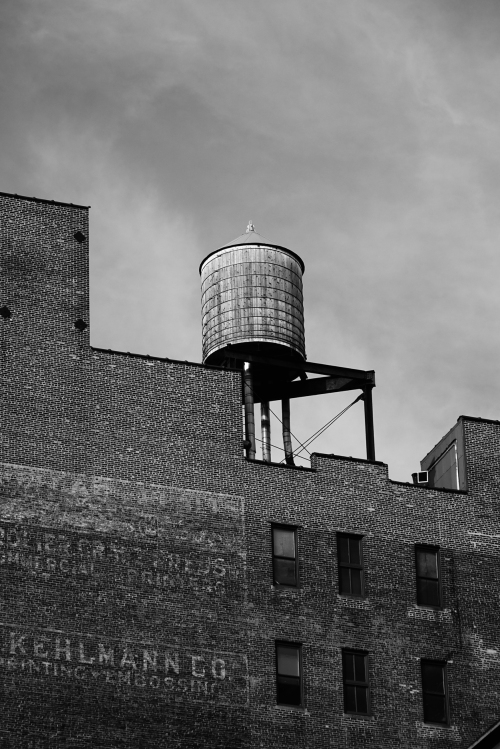 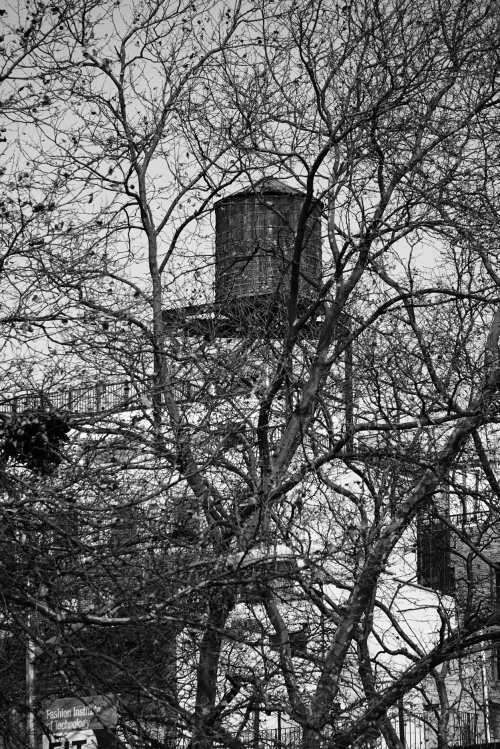 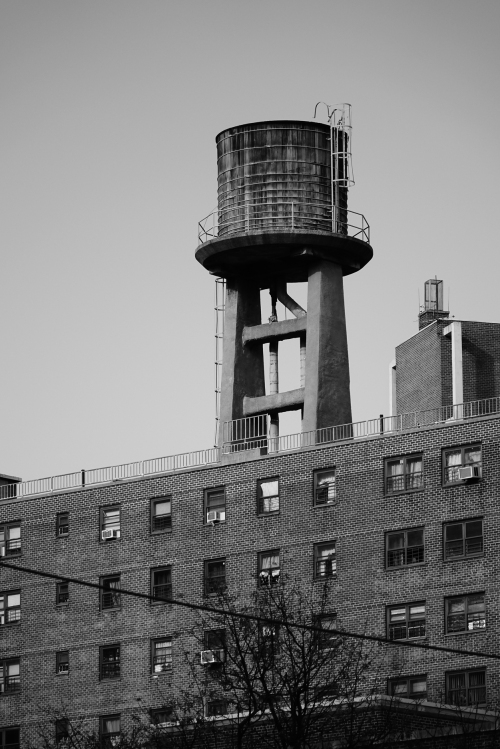 Lets discus this lens. You zoom by twisting the lens (or a use the toggle on the top of the camera) and it activates an electronic servo zoom. The zoom was fairly slow, and that leads to a precise adjustment of focal lengths, but again, it is a slow process. From 24mm to 200 mm it took me 4 seconds to zoom across that range. The aperture control is very nice, instead of changing aperture from a dial on the back or front of the grip like most cameras, the aperture ring is located like a traditional slr optic, on the back of the lens near the body. Those who appreciate a manual feel will dig this aperture ring, it has a very solid tactile feel with positive 1/3 stop clicks. I want to reiterate, it feels very substantial and of quality. You can also hit a slider button and the aperture ring then looses its clicks for adjusting aperture silently in movie mode. I suggest a 62mm UV filter as an add on. You want to protect that Zeiss goodness right? Go for B&W’s standard 62 mm UV. 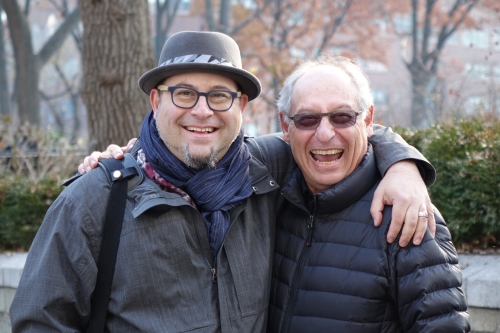 The camera measures 5.1 x 3.5 x 4” and while certainly not a pocket camera it is not overly large. It is about the size of an entry level DSLR like the Canon Rebel t4i or Nikon D5200 with a fat kit lens. There is ample rubber around the body and it feels good in the hand. The viewfinder is superb and has a diopter. I don’t wear glasses, but for me, it was very easy to view through the finder and the EVF is a High-resolution XGA OLED Tru-Finder whatever that hell that is, it works very well. You can with custom functions make sure you see exactly what you to see meaning things like iso, exp comp, levels, metering mode, and more is visible or invisible. The viewfinder has a nice rubber coat, and there is a built in diopter as well, so I assume that if you did wear glasses, it’s not bad at all. The LCD is a 3.0″ / 7.5cm 1,228k-dot tilting Xtra Fine TFT design and works very well. I have to say, it was very nice to use the tilt at ground level to get a cool perspective. Auto focus rocked, super fast and very modern. For those that want manual focus you have a very nice large focus grip on the lens which you can then rely on Sony’s excellent focus peaking feature. Whether you go AF or MF you will be content, both modes work wonderful.

Running through the zoom to get an idea just what 24mm to 200mm can give you. And the answer is, “a lot”.

RX10 sports a 20 megapixel 1” sensor that is up to the task. The camera rocks in low light and also has a new generation processor that builds raw and nice jpegs. I’d say pretty much you have a top of the line sensor in this camera, Sony has been making leaps and strides in their sensors for the past few years. The sensor leaves nothing to be wanting.

The following images are fine in their own right, but when you need to crop in post, how does the jpeg file hold up? Judge for yourself. 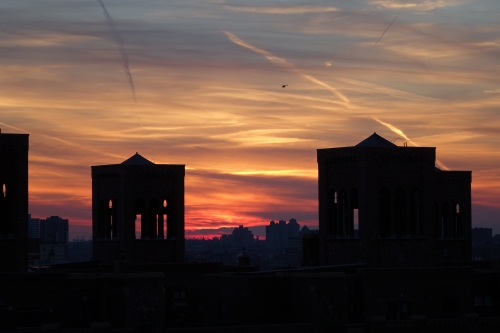 Sunset Creative Mode- notice the helicopter in the distance?

800 % crop into the image to pick out the ‘copter. Notice the detail in the blades? wow. 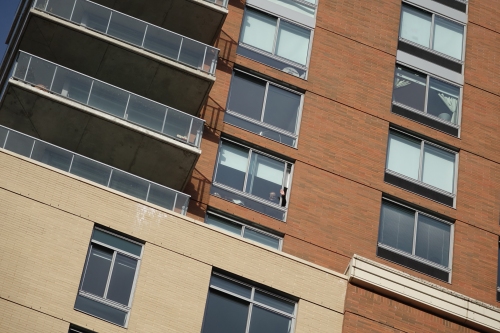 Can you find the mother in law waving?

There she is! That’s Elvira and she is at about 600% magnification. Great detail is still in the shot. That 1″ sensor really shines.

The camera has a clean design, it’s not cluttered. The top left of the camera has command dial with the usual modes, but also adds two custom settings, so if you like to profile the camera with specific style, it’s a breeze to recall the settings. The top deck LCD panel is lighted so you can see what your doing in the dark or dimly lit room (a feature from mid-line & high end DLSR cams)  There is also a exposure compensation dial that has a firm feel and is not easy to misadjust when the camera bumps against you (I really like that, my go to camera the XPro1 is so dang easy to accidentally move that dial).

This was taken at Photo Walk with National Geographic photographer Jay Dickman in Union Square NY. Image is shot at 24mm.

The buttons and dials on the back of the camera make sense, there is one Fn button you can assign to a multiple of tasks or get into a high level menu adjustment mode. The deep menu system is easy to navigate, you can access almost anything you would want to change and I found it easy to get in a make an adjustment on the fly quickly. 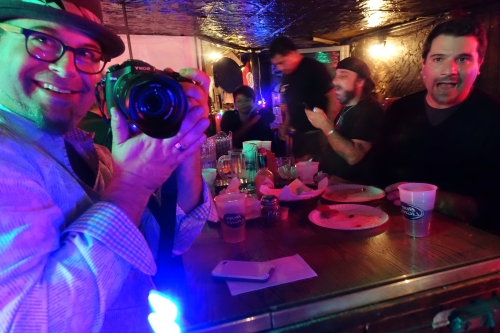 Gabe grabbed the camera and turned to a mirror to make this image of our party table with photographer Tim Cooper. I’m on the phone in the background struggling with AT&T’s crappy service.

So I didn’t play with the movie mode, I’m not into that but my research confirms the camera has an excellent video system that borrows a flicker free scan system that is only found on the FS700. It has a headphone mini jack and audio in with manual level control miniphone jack too, and for those who want XLR connections you can add the pricey Sony XLR-K1M Adapter and Microphone Kit to get perfect audio. Pretty impressive if you’re into that sort of thing.

The range of the zoom lets you really work your perspective.  Shot of the James A Farley Post Office steps in NYC.

And since the camera is a modern high end jammer, you get some other cool bells and whistles, like built in WiFi that can download to your mobile phone and tablets. The RX10 is also weather proof, so feel free to take it out in the rain. 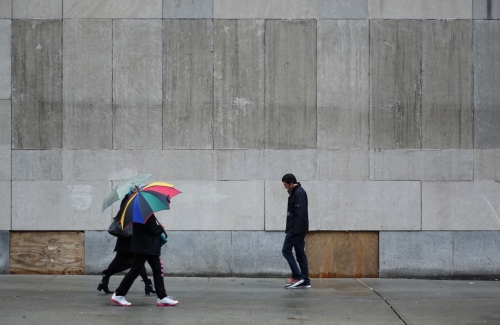 The only negative I can see on the camera is that it is a slow start up and shut down. The camera has to move around that big lens it takes its time. I counted a solid 2 second delay on the start up and shut down. That could be annoying. My other concern is that its not a small camera, that is the trend and cameras these days are high performance in small packages. This camera is super performance in a relatively large package.

So the camera sells at $1299. Yikes! But you do get a serious lens and really you don’t need to buy anything else to make some great images. The question I asked myself is who is this camera for? Well it’s not for the soccer mom and those that are looking for a bargain. This camera is for someone who appreciates high quality and has some disposable income. I am known as a camera whisperer and today I had lunch with the actor Alan Arkin. Alan is on the quest for the perfect camera, not to large, not too small and super high quality. I had been suggesting to him the Fujifilm X system for over a year and just when I thought I had him set, I busted out my RX10 and he fell in love right away. When I mentioned who I thought this camera was for, he proclaimed, “me!”. Needless to say, Alan bought an RX10 on the spot. I look forward to hearing how he feels after shooting with it. I hope he enjoys it, but he really couldn’t keep his hands of it at lunch.

Alan enjoying some lunch at Mercado in Hell’s Kitchen NYC. Between being a wonderful actor and teaching acting, he enjoys a good camera.

I would say it shines for travel photography; this is the ONE camera you need to pack when on the road. You will travel light, and be assured you will take great images in any light of near or distant subjects. At 10 frames per second and that great AF you wont miss anything. I give it 9 of 10 ten stars. Speed up the start up and shut down time and I’d give it a perfect 10. Now if you ready to buy the Sony RX10 be a mench and buy it at B&H.

This was taken at B&H’s Event Space during a Sony A7 demo. The lights are Ikan LED and the theme was Alaska. I like that soft bokeh of the background.