The “Faking It” Show at the Metropolitan Museum of Art Review

There are occasionally museum exhibitions that really hit the mark and make you say, “wow”. Shows that leave a bloody gash in what you think you know and become an influence on what you create henceforth. These shows don’t manifest often, perhaps once every couple of years and mostly they are a rarity. This show however is one of the former, a real “Wow show”. I suggest you don’t walk, you RUN to the Met and spend a morning or afternoon diving into this first ever major exhibition devoted to history of manipulated photography before the digital age.

The show is divided up  into sections, each focusing on a different set of motivations for manipulating the camera image. “Picture Perfect” illustrates early processes that sought to rectify the technical limitations of photography. These include turning B&W to color and increasing dynamic range by printing with multiple negatives. There are stunning hand colored images in this section as well as fake clouds. “Artifice in the Name of Art” indulges fantasy and here we have some wonderful examples of the pictorialists F. Holland Day and Edward Steichen. Perhaps the most interesting was the “Politics and Persuasion” section. This is where faking it shines, whence you can change the thoughts and motivations of society with an photograph. The well known image of  the Zeppelin, “Los Angeles” hovering next to the Empire State building is featured and until I read the placard, I had previously bought into the idea the mast on the Empire State Building was indeed a “dock” for dirigibles (if your interested, the whole story is told nicely in this NY Times article) and believed the fabrication. 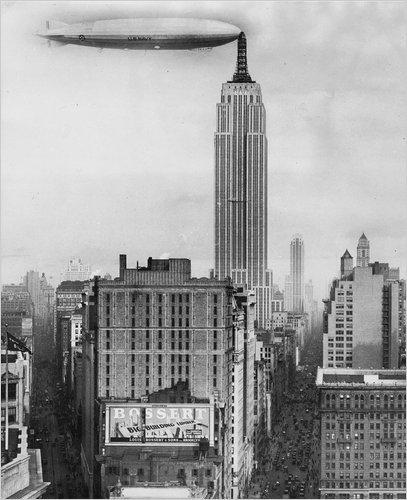 We are treated to spirit photography and some funky fun Weegee image in “Novelties and Amusements” as well as some stereo images that you have to look into a contraception to see. “Pictures in Print” shows where the work of the faking photographer ends up, and you guessed it, the media. I guess some things never change. I was thrilled to see in the “Protoshop” section one of my mentors Jerry Uelsmann‘s work. Two of Jerry’s prints were on display and I never get tired of looking at his surreal images made long before photoshop was ever conceived. When I first met Jerry at the SPE (Society For Photographic Education) national conference over a decade ago,  I asked him what he thought of the advent of Photoshop. He whispered to me, “The best part of photoshop is the unlimited possibilities and the worst part of photoshop… the unlimited possibilities”. A wise man for sure and I’ll never forget that exchange.

Perhaps the highlight of the afternoon was when I spotted the great landscape photographer Ansel Adams checking out the show. I was sure happy I had my camera handy and quickly made the exposure.

OK, I faked it. Ansel has been dead for many years, but I’m sure if he was alive he would have really loved this show!

I thought it funny that the principal sponsor of the show is Adobe and I have to thank them for a job well done. The curation of the show is exquisite and the walls are filled with a vast treasure trove of early photography and legendary photographers. The show runs through January 27th and I highly recommend that you visit the Met before the show comes down. For more information please visit the Met’s website and don’t fake it. You just might end up on the walls of a famous museum.

And one more thing, the image I made outside the Met on the steps of the sign for the show, it’s a fake too.

Hurricane Sandy and the Obliteration of a Safe North East

I’m not sure I know where I’m going with this blog post. Being a Manhattanite effected by the super storm Hurricane Sandy I was one of millions who lived through an interesting time to say the least. It was the week of Photo Plus East, the massive imaging trade show at the Jacob Javitz Convention Center  and we had just finished up a grueling week of camera a photo education. My favorite holiday, Halloween was a few days away and the reports of a “Frankentstorm” started being reported. The Saturday before the storm the government and media really started to talk about it. The presidential election was in the fury of its last days and even that took a back seat to the impending storm.

By Sunday it was obvious, we would be getting hit, and get hit bad. Hurricane Sandy was killing people in Caribbean, and she was moving up the eastern seaboard slowly. From the mid west of the USA a massive low pressure cold front was heading towards the Atlantic and would collide with Sandy far off the coast of the Carolinas. The weather scientists were saying this was more than the perfect storm, this was something we haven’t seen yet. Ominous.

As a photographer and not a first responder I decided I would continue shooting the event. Knowing that power was most likely going to go out, I set to charging all batteries and devices. Monday everything was closed or closing. Hurricane Sandy was approaching. I was going to fall back on photographer mode. I shot these all with the Fujifilm XPro1 with the 18mm f 2.0 lens over the next week. Images were shot in JPEG and then converted to black and white with Nik Silver Efx 2.

When the impending storm was just innocent fun.

Bottled Water was the first thing to run out. Monday the 29th.

The Mayor’s office began mandatory evacuations and broke the city into three zones. Zone A was expecting severe flooding and on Sunday they ordered evacuation from a block from our building. The Chelsea galleries are famous in this neighborhood, and they would be right smack in the center of Zone A. 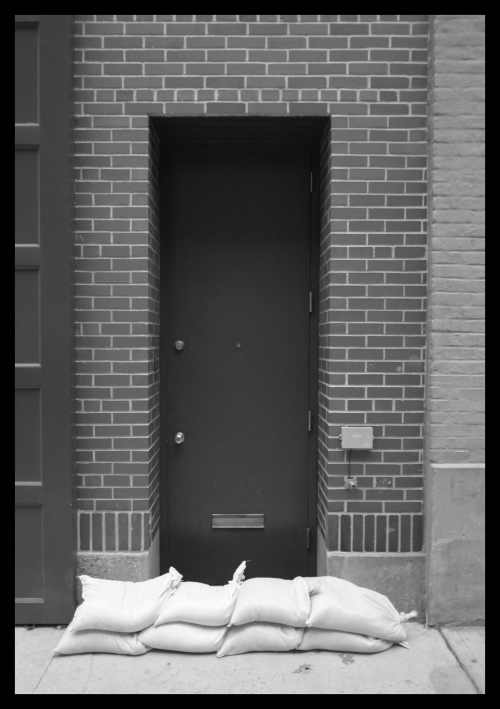 The Galleries of Chelsea braced for the impact, and flooding. 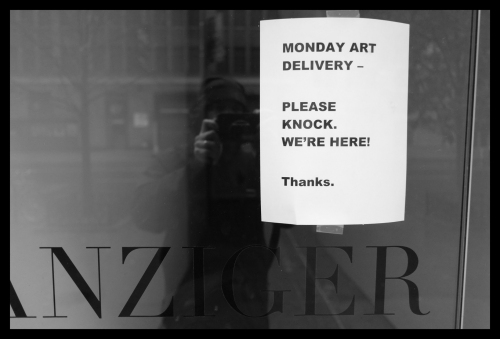 Art in NYC is bad ass. They stop for nothing.

The wind picked up Monday night and the storm smacked into Manhattan around 7:30 p.m.. I pretty much stopped shooting at this point and waited out the storm. We lost power shortly afterward.

and then the lights went out. The storm had hit Manhattan. 8:16 PM Monday the 29th.

I thought I had eclipsed my fathers wisdom was “a know it all”. Turns out Dad can still dispense with good advice, he had recommended we fill the bath tub with water. I followed Dad’s advice and was very glad because when the power went, so did the water. I shall not doubt my fathers capacity for wisdom again, if we had not had a bath tub of water to use to flush the toilette that would have put a huge damper on the next 5 days.

News became a luxury in a dark city. The morning of October 30th. 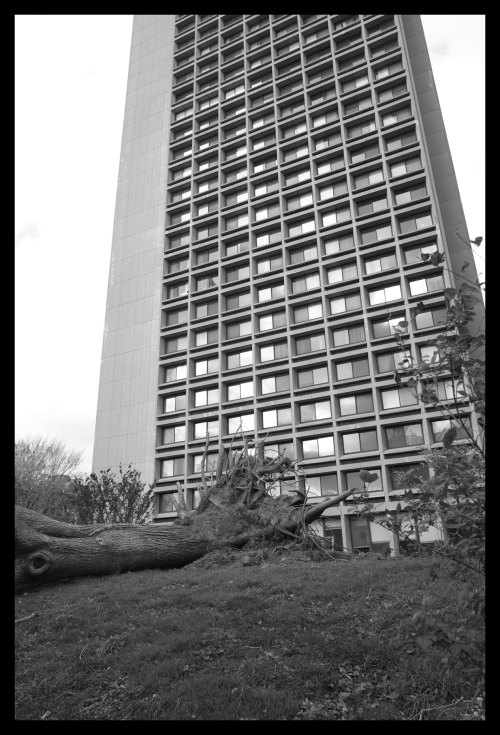 Manhattan had taken its hit. Overall not too bad, severe flooding and a few downed trees. However three other parts of New York, Breezy Point in Queens, The Rockaways (out by JFK airport) and Staten Island would get a hammering of epic proportions. On election day, November 6th I took a trip with Brandon Remler to Staten Island to survey the damage. What I saw will be forever in my mind of the power of nature and the futility of man to thrive in her shadow. 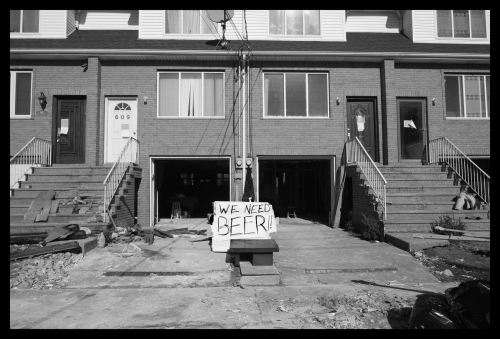 Cleaning up after the massive flood in Staten Island. Sense of humor is still dominant in New Yorkers. November 7th, 7 days after Sandy landed. 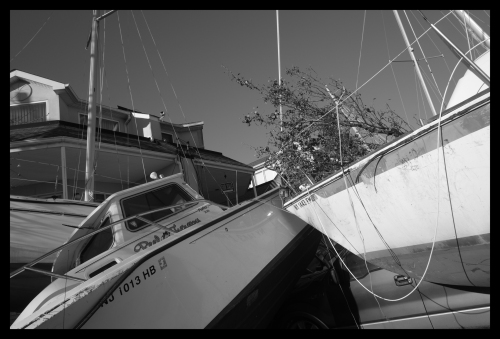 The boats created a surreal sense of place, all out of place.

The scope of property damage was unreal. 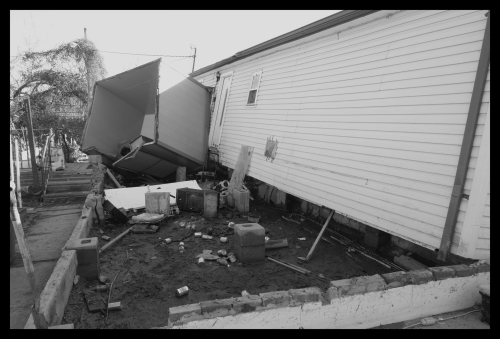 Homes pushed off their foundations by storm surges.

In some places, the ground itself was washed away. 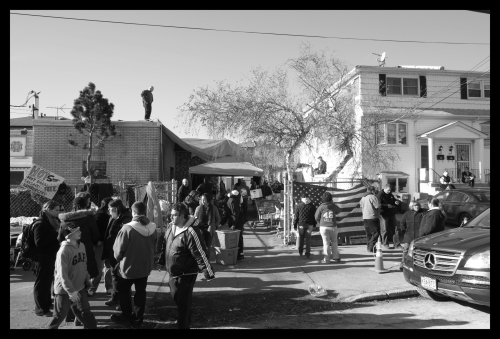 I witnessed devastation, but also a community united. The American flag was ever present. 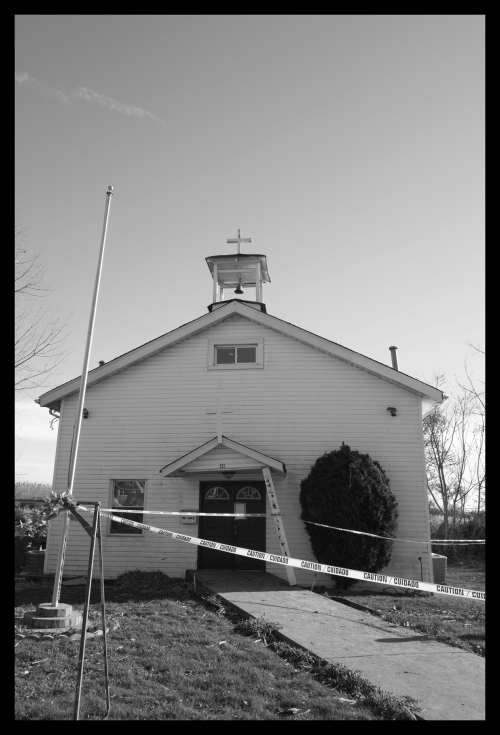 I walked away from this experience with emotions. Everyone you meet asked how you weathered the storm, and you ask them too. I actually felt guilty saying I had no electricity nor water and lived on the 18th floor without elevator service. Those are small inconveniences next to the fires of Breezy Point, the washouts of low lying Rockaways and Staten Island. We are told that this will now be a current state, vicious hurricanes and flooding. NYC now has it’s natural disaster, its earth quake/brush fire/volcano. Water. That will be our challenge.