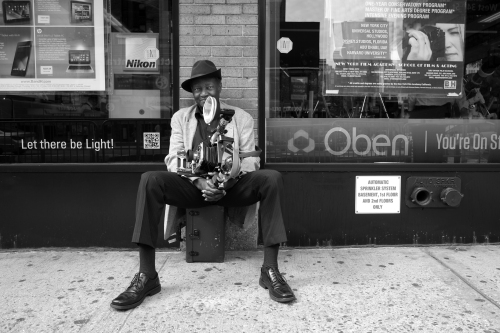 Shooting film is rare these days. That is not to say the film-based camera is irrelevant. Quite the opposite actually. The discipline of film has its merits, mostly in the form of personal choice of process than a distinct quality factor. Digital is as good as film, if not better. Film however is tactile and extremely deliberate. The tactile essence plays the human’s desire to make something solid, visible and touchable, because zeroes and ones that make up a digital file are abstract as they reside on a hard drive invisibly to your 5 senses. The negative, for all its flaws can be beheld with out the use of any other technology. Its existence is physically a substantial object and while the negative is not the end, it has a promises that it can create something very special in the form of the print. Holding a gorgeous hand printed image on an exotic paper where texture and the light of day expresses the latent image is a much different feeling than holding an iPad or viewing on a display. I won’t diminish the digital file, I’ll just say it’s an altogether alternate way of viewing the photograph. Certainly the digital file can be printed on a vast amount of papers and styles, so in the end, the way we create our photograph is moot.

Destined to view on a screen or as a print, film and digital are interchangeable. Negatives can be scanned, and digital negatives made as well. How we arrive at the finished photograph and the style of the work is paramount in the pursuit of finding photographic style. Take for instance the NY Photographer Louis Mendes. He excretes photographic style in his choice of camera and the way the image is delivered, (as a 4×5 instant print).

“Louis Mendes is a quintessential street photographer best known for his Speed Graphic camera, blocked hat and consistent suave style dubbed “Shaft with a camera.” Mendes is a staple in New York City to tourists and natives alike. He’s been photographed thousands of times cradling his Speed Graphic as if he were the Statue of Liberty holding her tabula ansata. Portraits of Louis Mendes have won awards internationally and grace the walls of galleries world-wide.”

Louis shoots in a jacket, fedora and with an old skool effeincecny that belies a true professional. Louis is a can do guy, and his smile is wonderful to behold. Read more about Louis and his Speed Graphic here, but his facebook info sums him up nicely: