I Just Shot the Best Photograph I Have Taken In Many Years. 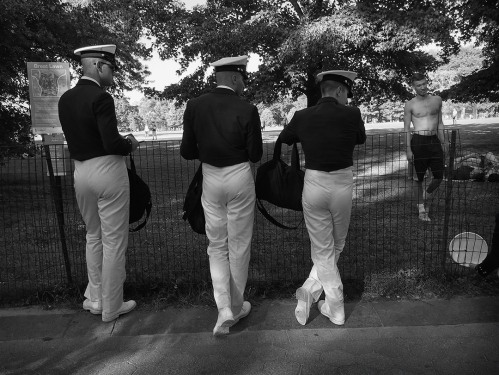 Last Sunday afternoon, I shot the best photograph I have taken in many years.

That statement will depend upon the beholder, but in my not-so-humble opinion it is acurate. I’m actually not proud of that because it was so easy to execute on first glance, but was it really? Also I live up to my earlier work, which this is not, but then again, it is. If I sound confused, I’m sorry. What I really am, is amazed. Amazed that I saw this, at that the right moment, and executed it properly, perhaps even perfectly.

This image is complex, lots of things are happening and the light is just right. The composition evolved into the perfection it is. The subjects, 3 sailors along a fence and a buff guy with no shirt emerging from a field.

I love it because it’s homo hot, yea, I went there and said that. At the core of my work I want to challenge viewers and take them to dark places inside themselves and let them shine light inside themselves. For the past several years my work has been very academic, but with this image, I feel I have reached back to my roots and mission. To be clear, I don’t want my work to make you feel uncomfortable, I want it to turn you on and question what makes you uncomfortable because you got turned on.

I also love it because I have learned so much. Pierre et Gilles are terrific influences on me, albeit in color photography. Those two bring homo eroticism to the forefront, but other influences are present too. The work of my friend and mentor, the late Len Spier. Len’s work is super spontaneous, black and white, and instantly classic. Mel DiGiacomo distills lessons about being ready, searching with your eyes to find quirk in everyday life. Both of them are black and white shooters, I have sworn off color for over two years now (I only miss it occasionally).

It would seem that every lesson I have learned is present in this image. I turned a corner in Central Park around 6 pm and found my decisive moment. Immediately moving into position and pulling out the only camera I had with me, my iPhone 6. I turned it on, and swiped left to bring up the camera mode. Meanwhile the Frisbee players in the field overshot and the disc landed right of the sailors. One bent down to pick it up. There were four, now there were three. The picture was happening really fast, the moment was almost lost. I leaned out with my right hand, and took two shots in a row. I didn’t have time to solve the change in composition the fourth sailor made by leaving the frame. I was afraid the entire dynamic of the scene would be lost. It wasn’t. My quick composition was enough. I captured it. But I thought it was lost, because I would have to crop the fourth. A day later, I reviewed it and started to notice while I lost the fourth sailor/subject, I gained the frisbee player. And he was hot and shirtless. A small post crop would remove the fourth and the frisbee would become a circular element that sailors and players alike seems to be looking at. The errant frisbee gave direction to the image. It would seem that afternoon in the park, the photo gods smiled upon me.

Photo nirvana occurred. You might agree or disagree with me. It doesn’t happen often. But when it does, it reminds me why I’m riding this horse called photography. 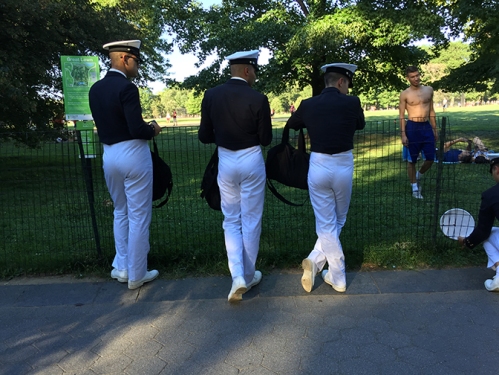 The unedited version from iPhone 6.

Here is the original image, and the snapseed processed version. 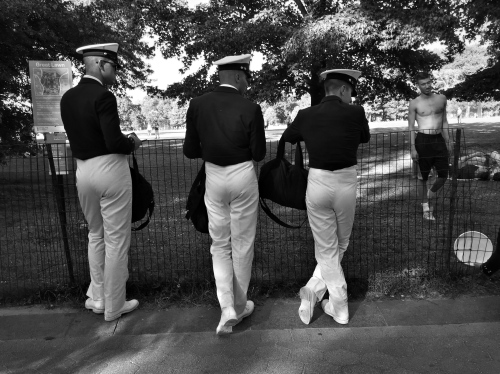 The above image was processed in Nik Silver Efx. I wish I had had my Fujifilm XPro2 with me, but I didn’t want to be burdened. I’m thankful for the iPhone. What’s the best camera? You know the answer to that.

2 Comments to “I Just Shot the Best Photograph I Have Taken In Many Years.”