The “Faking It” Show at the Metropolitan Museum of Art Review

There are occasionally museum exhibitions that really hit the mark and make you say, “wow”. Shows that leave a bloody gash in what you think you know and become an influence on what you create henceforth. These shows don’t manifest often, perhaps once every couple of years and mostly they are a rarity. This show however is one of the former, a real “Wow show”. I suggest you don’t walk, you RUN to the Met and spend a morning or afternoon diving into this first ever major exhibition devoted to history of manipulated photography before the digital age.

The show is divided up  into sections, each focusing on a different set of motivations for manipulating the camera image. “Picture Perfect” illustrates early processes that sought to rectify the technical limitations of photography. These include turning B&W to color and increasing dynamic range by printing with multiple negatives. There are stunning hand colored images in this section as well as fake clouds. “Artifice in the Name of Art” indulges fantasy and here we have some wonderful examples of the pictorialists F. Holland Day and Edward Steichen. Perhaps the most interesting was the “Politics and Persuasion” section. This is where faking it shines, whence you can change the thoughts and motivations of society with an photograph. The well known image of  the Zeppelin, “Los Angeles” hovering next to the Empire State building is featured and until I read the placard, I had previously bought into the idea the mast on the Empire State Building was indeed a “dock” for dirigibles (if your interested, the whole story is told nicely in this NY Times article) and believed the fabrication.

We are treated to spirit photography and some funky fun Weegee image in “Novelties and Amusements” as well as some stereo images that you have to look into a contraception to see. “Pictures in Print” shows where the work of the faking photographer ends up, and you guessed it, the media. I guess some things never change. I was thrilled to see in the “Protoshop” section one of my mentors Jerry Uelsmann‘s work. Two of Jerry’s prints were on display and I never get tired of looking at his surreal images made long before photoshop was ever conceived. When I first met Jerry at the SPE (Society For Photographic Education) national conference over a decade ago,  I asked him what he thought of the advent of Photoshop. He whispered to me, “The best part of photoshop is the unlimited possibilities and the worst part of photoshop… the unlimited possibilities”. A wise man for sure and I’ll never forget that exchange.

Perhaps the highlight of the afternoon was when I spotted the great landscape photographer Ansel Adams checking out the show. I was sure happy I had my camera handy and quickly made the exposure. 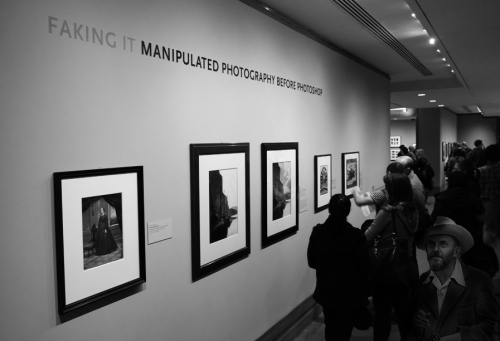 OK, I faked it. Ansel has been dead for many years, but I’m sure if he was alive he would have really loved this show!

I thought it funny that the principal sponsor of the show is Adobe and I have to thank them for a job well done. The curation of the show is exquisite and the walls are filled with a vast treasure trove of early photography and legendary photographers. The show runs through January 27th and I highly recommend that you visit the Met before the show comes down. For more information please visit the Met’s website and don’t fake it. You just might end up on the walls of a famous museum.

And one more thing, the image I made outside the Met on the steps of the sign for the show, it’s a fake too.